Minimizing the Reliance on Chemical Fertilizers 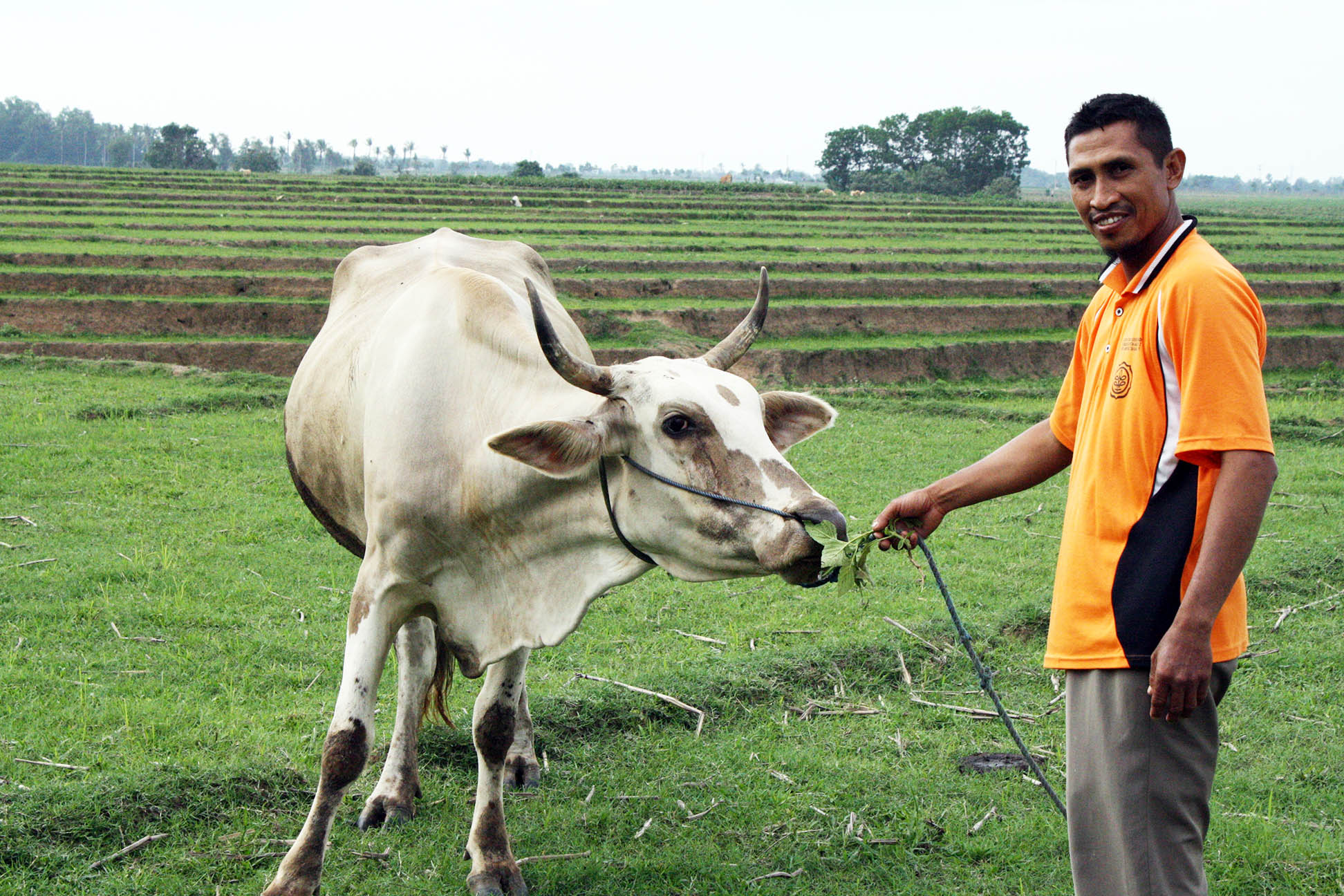 The intense promotion of chemical fertilizers among farmers in Indonesia started in 1970s as supporting part of the distribution of results of cross plant variety, which require the use of urea in order to grow the plants.  The use of these chemical fertilizers are steadily increasing every year especially with the subsidy in place.  Lately, several parties have raised their concerns with the deteriorating conditions of the fields and surrounding environments due to the use of excessive chemical fertilizers, and try to revive and bolster the practices of a more eco-friendly agricultural system.

Bardiyo (42) is one of them.  A man with a Javanese lineage who has been living in Lampung since his early childhood now is trying to reduce the use of chemical fertilizers on his fields.  Initially, he represented the Sido Maju Farmers Group to take part in organic farming training for 20 days in Bandar Lampung.  He ever since shows his relentless efforts to promote the use of non-chemical fertilizers to other farmers.

According to Bardiyo, this is also due to the tendency among the farmers to see only on the outcome.  The results of the use of chemical fertilizers are visible within days.  Meanwhile, it takes a minimum of one and a half month or even years for organic fertilizers to demonstrate the effect of its use for initially there is a field conditioning process to the already negatively impact fields caused by chemical fertilizers.

“Farmers want instant results, quick, but do not wish to shoulder the risk sustained by the soil,” Bardiyo continued.  But this mindset does not apply anymore to Bardiyo.  On December 2012, he constructed a BIRU reactor at the capacity of 4m3 in his home.  Yes, he admitted his desire to build a biogas reactor is to put the use of bio-slurry to the maximum effect.

With the three cows that he owns as the producer of biogas materials, Bardiyo started to feel the benefits of Domestic Biogas (BIRU).  Of course, the biogas produced is used for the daily cooking needs of Bardiyo family, entirely replacing the firewoods and 2.5 LPG tanks expended on a monthly basis.  His kitchen is cleaner and he saves some expenses.

For the bio-slurry itself, Bardiyo tried it by directly applying it on a rice paddy.  He saw a decline on his harvest as much as 200 kgs at his initial planting season out of a 3,600-meter squares that he planted.  At the time, he was still using a chemical fertilizer but at a 50% lower level.

“The cooked rice lasts up to two days without losing its freshness and it tastes differently,” Bardiyo said smilingly.  His dream to serve a healthier food for his family started to come true.

On the very same field during corn planting season, Bardiyo also tried the use of bio-slurry and reduce the use of chemical fertilizer down to 20%.  His harvest experienced a 100-kg increase.

Bardiyo then put a more serious effort in putting the bio-slurry to use and in 2013, on behalf of Sido Maju Mitra Tani, he introduced Metroganik, a fertilizer and pesticide processed with bio-slurry as the raw material.  For liquid fertilizer, Bardiyo only added coconut water and cow urine to the liquid slurry.  As for the pesticide, he added neem leaves, guduchi leaves, West Indies mahogani leaves, as well as ginger family or plant roots which are usable as spices or taditional medication such as ginger, turmeric, galangal.

Mealybug pests which often time invades long beans have been reduced up to 75% due to this pesticide.  Although the pesticide is classified as non-lethal control, this pesticide has successfully getting rid of the mealybug and prevent them from returning.  Crop failures due to brown planthopper attack on rice paddy may be anticipated as this pesticide is capable to eliminate the pest up to one-half.

Out of 40 liters of liquid slurry that Bardio is able to generate monthly through his own reactor, he further process half of the slurry production into pesticide while the other half is processed into liquid fertilizer.  As for the solid fertilizer, he could generate 100 kgs of fertilizer.  Bardiyo also plans to put the bio-slurry produced by other reactors to use.  He did this previously when he received order for fertilizer in substantial amount.  As of today, Bardiyo has only been able to cover the markets at Central and East Lampung.  Fortunately, an Agricultural Extension Agent from the Office of Agriculture supported his product and even helped him to market the products through social network.  The supports have also been given by academicians.  The University of Lampung (Unila) has performed sample testing to find out the content in Metroganik fertilizer and pesticide and now is being tested in their own field.  The presence of farmers like Bardiyo will embrace more people supporting what they are doing, and it is not impossible to restore farmers’ reliance on chemical fertilizers.  Healthy environment will lead to healthy community.