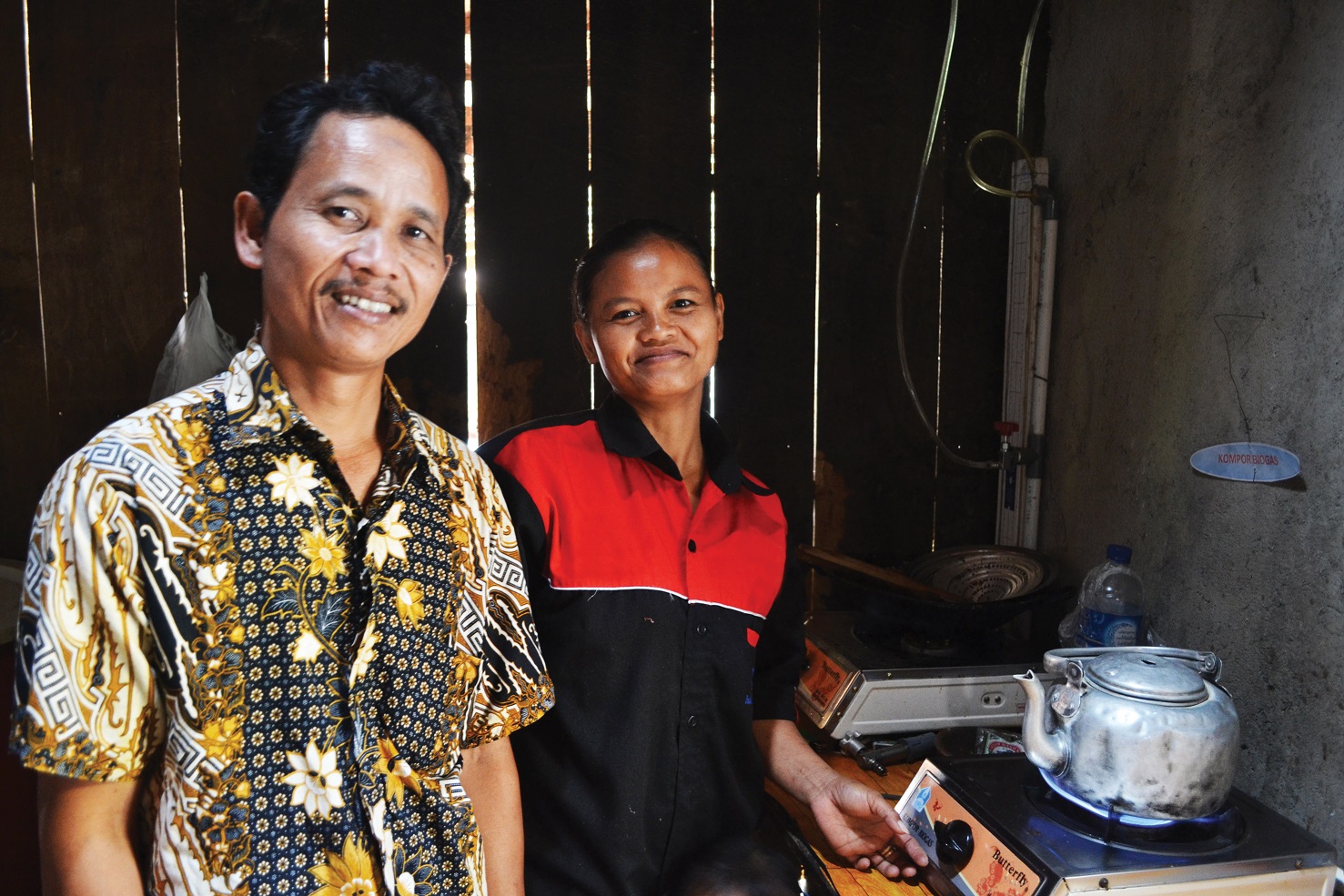 The community of Lembu Village in which are predominantly farmers and cattle farmers have reached of such an awareness level to utilize the manures of their cattles.  Starting in 2008 facilitated by Trukajaya Foundation, it then established a collaboration with BIRU programme in 2012, in which as of now there have been ninety six biogas reactors constructed in this village.

“We know the benefits (of biogas).  Highly efficient and enable us to maximize the existing potentials,” uttered Karsono (40), the Head of Bariklana Farmers’ Group.  His backyard often time is used as a meeting place for farmers where there are also a 4 m3-capacity BIRU reactor constructed since last year.  Sriyatun (35), Karsono’s wife, gladly showed her biogas-fueled stove.  “Now we have our own source of flame to cook and for lighting purposes,” she said smilingly.

In addition to the direct benefit of biogas, Karsono has also put the bio-slurry production to use.  Next to his cattle pen, he spares a dedicated place for his worm farm and a small pond at a size of three times of table tennis table where he raises catfishes.  His backyard is almost like a laboratory, a place where he carries out an experimentation with bio-flurry for various functions.

“For feeding the catfish, we still produce the pellet by manually grinding the materials, and mixing it with bran and vitamins, and we can immediately see the results,” uttered Karsono.  Additionally, he also reaps the benefit through the production of pesticides where he mixes the liquid slurry. This mixtures have managed to repel such pests as the rice bug and the green vegetable bug from his paddy field.  Up to now, the pesticides and fertilizers with slurry as the basic ingredient produced by Karsono and his farmers’ group are solely for his group’s consumption only.  They have not considered to distribute the products to the market due to legality issues.

At Lembu Village itself, there are at least six bio-slurry processing units, which were constructed with the collaboration between the community and Trukajaya Foundation.  The organization which is based in Salatiga and has been a BIRU partner since 2012 focuses on the development of public welfare, including the utilization of renewable energy and eco-friendly agricultural technology.  Kristin Damayanti, a Trukajaya staff whom we met at Karsono’s residence said, the organization at this time also encourages the people to maintain their food security.  One of the strategy being developed is through the development of such feed stuff as tubers, where they are transformed into flours as a substitute to wheat flour.

“We want the people to meet their own needs,” uttered Kristin.  For energy security, biogas is a programme introduced to transform the energy concept into real action considering that there are fairly huge potential in the area, in addition to solar panel which at this time is still in experimentation stage.  Trukajaya offers a financing mechanism through a credit scheme in order to enable to lift the burden of sizable initial investment from those who are interested to build biogas reactor in addition to a subsidy provided by BIRU programme.  An 18-month loan repayment schedule will not start until 1 month of operational period of biogas stove elapses.  This is to ensure that the public receives an assurance that the constructed biogas reactor is a quality product and it works as it is meant to be.