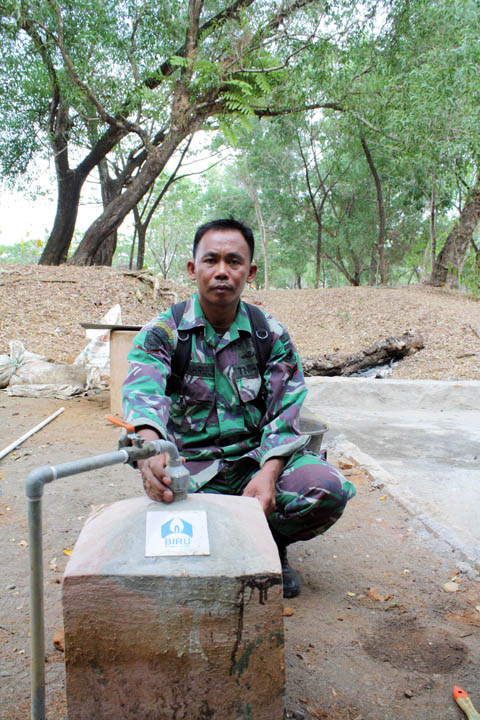 The Kariango Army Strategic Command Compound is not free from the looming grey cloud over Maros that late afternoon.  But the atmosphere within the compund is in fact lively with high-spirited yells by tens of school teenagers attending outbound activities managed by Tirta Yudha Outbound Management under the Airborne 3rd Infantry Brigade/Tri Budi Sakti, Maros, South Sulawesi.

Those activities were not the only one which have turned that military compound to be less rigid that its appearance from the outside.  Find 432nd Airborne Infantry Batallion/Waspada Setia Jaya, one of three batallion units stationed there.  In one of its corner we can see a 12-cubic meter capacity BIRU biogas reactor installation, complete with its fermentation tanks for bio-slurry and a large board exhibiting pictures of activities and biogas utilization.  Who says that military institution are incapable of saving energy and being eco-friendly?

First Sergeant Syahrul Hangkemona (41) who is in charge for daily management of the biogas was so passionate in accompanying BIRU Team who made a visit and he explained in details on whatever they have, they are, and they will carry out with regard to biogas utilization.  Dressed in a full uniform, First Sergeant Syahrul also described the intial ideas on this biogas construction offered by Major Fasda Wina, the wife of Lieutenant Colonel (Inf) Aji Mimbarno, S.AP, former Commander of 432nd Airborne Infantry/Waspada Setia Jaya.  At the time, Major Fasda watched two newsfeed in the television, namely mass rally protesting the increase of LPG gas and second, biogas users who have never experienced issues of gas scarcity.

“They (biogas users) raising two cattles are able to resolve the issues, why can’t we the owners of more than ten cattles do the same?  I immediately asked for my husband’s consent who were then assigned in Merauke.  He greatly supported the ideas,” Major Fasda said when we contacted her via telepohone.  She is now accompanying her husband, who is no longer assigned as the Commander of 432nd Airborne Infantry Batallion, who is pursuing his studies in Bandung.

Together with First Sergeant and some other personnels, Major Fasda then looked for information at the Agricultural Technological Assessment Station in Makassar.  They subsequently visited KSU Bulu Saukang.  This multipurpose cooperative has been the BIRU construction partner in South Sulawesi.  They immediately invited Muhammad Ansar, the Head of KSU Bulu Saukang and Sitti Faridha Razak, the Provincial Coordinator of BIRU Programme for South Sulawesi region to perform socialization activities with regard to BIRU Programme at Army Strategic Command headquarter.

It did not take long, as the review for locations to build BIRU reactor immediately took place in the military compound and the construction process was completed in March 2014.  The biogas and bio-slurry management was handed over to the Army Primary Cooperative of Waspada 432 with four personnel working on shifts.  Gas produced by the manures of 16 cattles belonging to the battalion were able to replace 20% of LPG consumption for the need of battalion’s kitchen where approximately 400 personnels receive their daily food portions through the kitchen.

“Back then Miss Fasda took her time to calculate and the outcome is that the institution managed to save 8 large LPG tanks out of 40 tanks consumed on a monthly basis,” uttered First Sergeant who has devoted himself in the 432nd Battalion for twenty years.

Meanwhile fermentation tanks situated near the reactor were constructed following First Sergeant Syahrul and Lieutenan Colonel Aji return from KSU Bulu Saukang.  First Sergeant Syahrul admitted that he learned a lot about the technology and utilization of biogas from Bulu Saukang, including maximizing the benefits of bio-slurry.  Presently the solid bio-slurry is used in vermiculture (worm farm) while the liquid fermentation products have been distributed to numerous locations.

“When we tour to the villages or while travelling on our own, we do not necessarily find the farmer’s groups, and finally I sought a permission from my superior officer in order to use the ocassion of the batallion gathering to initially promote the fertilizers to the personnel and ask them to take the fertilizers with them when they are off-duties and return to their home towns,” explained First Sergeant Syahrul when asked how he markets their liquid fertilizers.  Those personnels were also given the contact number in case anyone is interested to find more information about the fertilizers.

By using this strategy, their liquid fertilizers have been well distributed not only in Sulawesi areas but also in the Borneo and Java.  Positive response came from a community member in Jeneponto Regency who says that his planted vegetables grow 10 days faster.  Previously, it took 45 days before he can harvest the vegetables.  After using bio-slurry liquid fertilizers, potential vegetables buyers have started to bargain for the commodities while the plants were only 30 days.  Presently farmers is experimenting to use the fertilizers on their shallots.  The differences have started to show up between the treated lot and untreated lot.

Major Fasda said that presently their fertilizer products is in the process of obtaining the permits, together with the fertilizers being produced by KSU Bulu Saukang.

BIRU Installation in 432nd Batallion has received appreciation from the senior commander in the Army Strategic Command when they toured the institution as this is the first biogas installed around the Army Strategic Command.  The 3rd Airborne Infantry Batallion will install the biogas reactor in the near future to utilize the manures of 110 cattles they raise.  The expectation is to exemplify for other military compounds and barracks in Indonesia.  Are you ready? BIRU aye aye Sir!!!