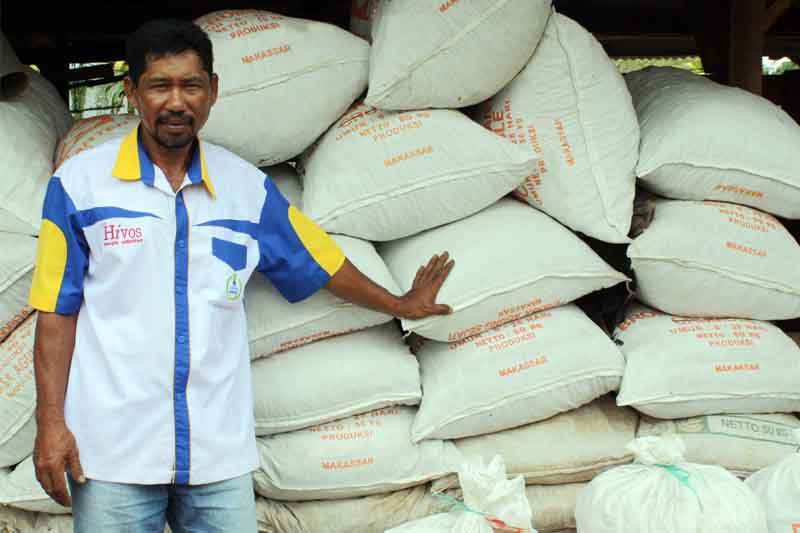 A panel board stands in a road turn toward Polewali and Balocci Hamlets, Benteng Gajah Village, Tompobulu Subdistrict, Maros Regency, South Sulawesi.  You are Entering a BIRU-Domestic Biogas Development Area Toward a Energy Self-Reliance Village, the inscription on the blue board says.  The village which is situated approximately 1 km to the east of Tompobulu Subdistrict is indeed very serious in bringing energy self-reliance to come true.  One of the evident is the presence of 30 BIRU biogas reactor in their village.

Majority of village inhabitants work as farmers or livestock farmers.  The climate and soil conditions of the village comprising of Balocci, Polewali, Sakeang, and Harapan hamlets are indeed suitable for farming and livestock farming businesses.  Almost all household own a livestock animal, in which the manures can be put to use as the raw materials of biogas.

Muhammad Yunus (46) is one of the village inhabitants who has been successfully convinced to build biogas reactor in his home.  The Head of Polewali Hamlet build a reactor with 10 cubic meter capacity beside his house after receiving information from Bulu Saukang Multi Purpose Cooperatives.  Now his family has stopped using firewood as well as LPGs for their cooking needs.

“The 3 kilograms LPG tank provided by the government is no longer in my possession.  I have given it away to somebody else,” Yunus said.  Yunus can even use the gas produced for lighting purposes for an average of 3 hours per day.

The successful promotion of biogas technology has been admitted by Ansar for they provide numerous benefits generated by this biogas.

“Should you dilligently explore it further, there are plenty of benefits that we can get it from,” Ansar said.  In addition to being saved from pollution, the biogas waste or better known as bio-slurry may be futher utilized as the raw materials of fertilizer production.  Although it has not been professionally managed, the cooperative in which he is part of the Management has started to pioneer the production of organic fertilizers out of bio-slurry.  There have been some regular customers for their products, majority of them in fact come from Southeast Sulawesi.  Two thousand liters of liquid organic fertilizers have been delivered to North Kolaka and Konawe Regencies.  Now, farmers in Konawe are reluctant to start planting until the fertilizers have arrived for they have proved the difference between peanut plants sprayed with bio-slurry and those which were not.  Meanwhile, solid fertilizers produced by Yunus have regular customers in Malino, an area in Gowa Regency which is popular as the Summit of South Sulawesi.  Yunus sells a 50-kg sack of fertilizer at Rp 30,000 to the owner of a 3-hectare clove plantation who refuses to use chemical fertilizer in his own plantation.  Previously, the plantation owner imported the fertilizers from Malaysia at Rp 25,000 for a 5-kg sack.

From the reactor that he owns, Yunus may produce on daily basis between 50-70 kg solid fertilizer and 50 liters of liquid fertilizer.  This liquid fertilizer is then deposited at Bulu Saukang Multi Purpose Cooperatives and sold altogether at Rp 25,000 per liter.  Compare it with other liquid fertilizers in the marketplace which is sold between Rp 45,000 – Rp 70,000 for each liter.  As of today, Bulu Saukang only collects bio-slurry from 4 reactors which no longer use water to mix with the manures prior to the processing to biogas, but rather use the livestock urines.  This is mainly done to maintain the fertilizer quality which are to be sold.

Ansar said that the effective way to promote bio-slurry is by demonstrating the results.  To convince the people who wish to build biogas reactor more, he gave a 1-liter liquid fertilizer, on the condition that it is not sprayed to the entire farm, but rather only on partial part of the farm, so that they will really see the proof of the advantage of bio-slurry fertilizers.

What is being done by the population at Benteng Gajah together with Bulu Saukang Multi Purpose Cooperatives passionately is a proof that the biogas technology is acceptable by the public on the condition that they receive comprehensive knowledge on the list of benefits that they may enjoy through such technology.

“The failure of the previous program was due to the direct implementation without having the proper technology in place.  People do not understand.  People should be provided with the technology.   There are plenty of people who reject biogas for they do not understand,” Ansar said.

In the future, Bulu Saukang Multipurpose Cooperatives which name is adopted from the hill in the background of Balocci and Polewali Hamlets expect that the permit for their fertilizers will be issued hence facilitate them in marketing the products, rather than relying only on the network of their relations as it has been done throughout these years.  With the support of 12 trained construction workers, Bulu Saukang Multipurpose Cooperatives target each family with a livestock animal may construct a reactor with a minimum capacity of 4 cubic meter.  The initial target was 55 units of reactor of around 500 head of households in the village.  Should this target is achievable and followed by other households, then Benteng Gajah Village may be truly self-reliance on energy.