Biogas Has Saved Us 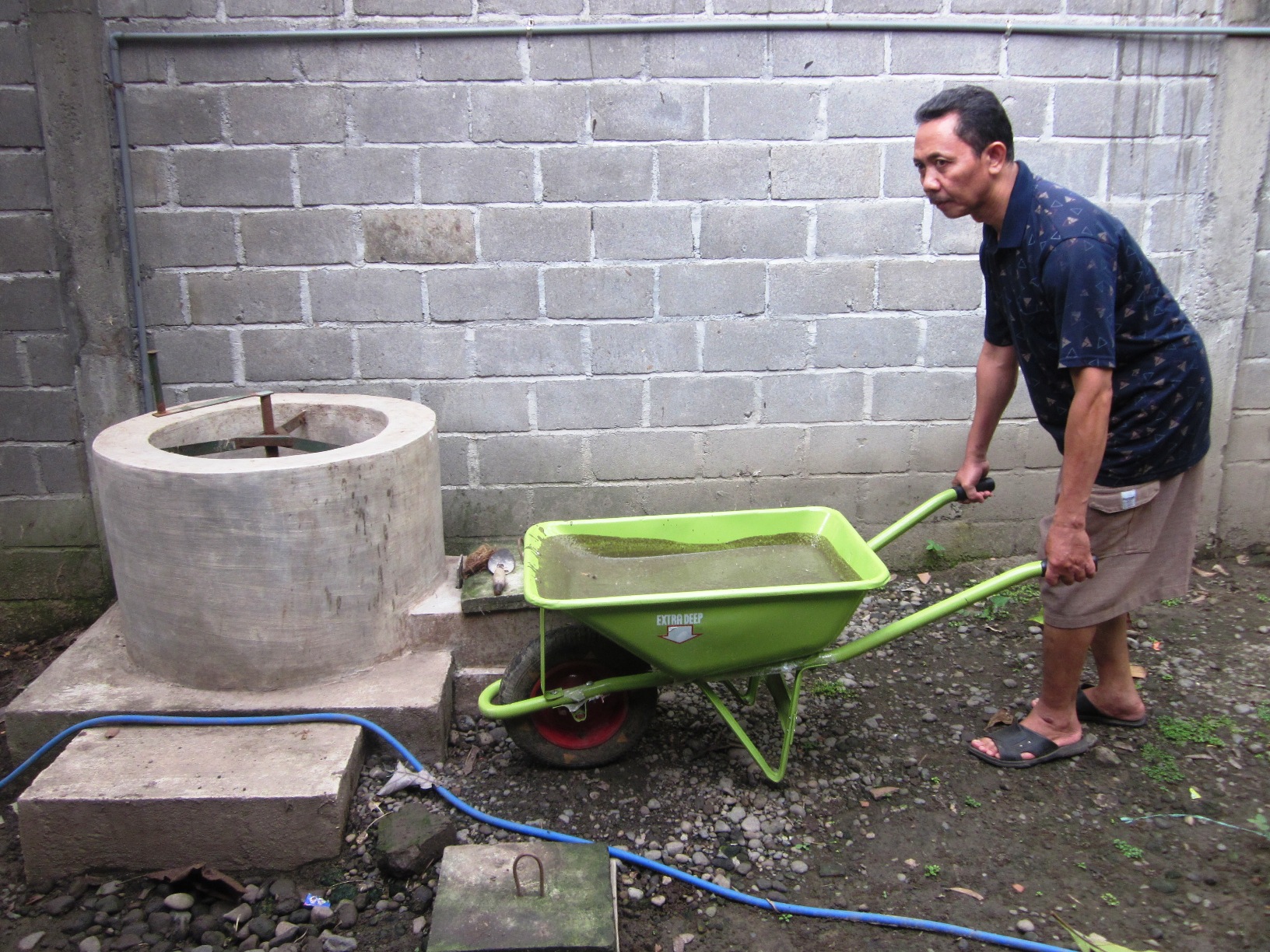 “It is my desire to have my own business but without the offensive odor which may bother the neighbors.”  That sentence is uttered by Abas (54), a meat poultry farmer from Sodo Hamlet, Sodo Village, Pakel Subdistrict, Tulungagung Regency when starting the conversation with East Java BIRU.

Abas started the meat poultry farming business in 1999, following the monetary crisis which swept Indonesia.  Previously, Abas was a catfish farmer, however due to the rising price of catfish feedstuff following the monetary crisis, farming catfish had become unprofitable.  He then switched to the business of meat poultry farming with 200 birds initially.  After more than 14 years of pursuing the business, Abas started to encounter problems here and there, especially by unpleasant odor created by the chicken manures.

When the population of the chickens were around 200-500, it was not such problematic.  However, as the population raises to 1,000-2,000 birds that he is raising right now, the amount of manures produced have become substantial.  Moreover that the distance between his chicken coops and the neighbor’s house are nearby.

Along the way leading to Abas’ house, the houses of his neighbors are separated by a space of less than 5 meters.  Whenever the wind blows, the unpleasant odor of chicken manures often times have to be inhaled by the neigbors.  Meanwhile, in that village, there are 2 poultry farmers.

Some of the neighbors started to voice their objections, and even filed a complaints to the Head of Neighborhood circle.  Abas racked his brain to calm his neighbors’ rage, unless he is ready to accept to see his business forcefully shut down due to the unpleasant odor.  For Abas, this business has been his lifelihood throughout these times.

“I have tried various methods.  I mixed the manures with soft husk, limestone powder, spray a liquid over the manures, and up to mixing the birds’ drinking water with EM4.  None of them was effective enough to reduce the unpleasant odor,” Abas said.

Abas did not lose his hope.  He even increased his effort to search for information through the internet and ultimately read about the biogas technology to cope with the waste and was interested to try it.

At the time, on mid June 2012, Tani Wilis Village Cooperative – one of BIRU CPO in East Java – was among the participants of exhibition of Agricultural Office of Tulungagung Regency.  Abas then visited the exhibition booth of Domestic Biogas and received information as well as brochures regarding the activities of Domestic Biogas performed by Tani Wilis Village Cooperative, Sendang, Tulungagung.  Without further delays, Abas asked Umi, his wife, to accompany him to Sendang to directly prove the biogas technology excellence which is said to have been able to eliminate the upleasant odor of the manures.  There he met Suwarto, the Tani Wilis Village Cooperative Supervisor which also happened to be the Person in Charge for Biogas program in the cooperative, as well as Juwardi, the biogas supervisor.

During the occasion, Abas and Umi received a more comprehensive information with regard to the developed technology in Domestic Biogas (BIRU) program.  More than just a discussion, they were taken on a tour to witness directly the biogas reactor installed and were engaged in dialogues with livestock farmers using Domestic Biogas.  Information that Umi and Abas were even more complete.

Abas and Umi then returned home and started a discussion.  Ultimately this couple decided to once again contact Tani Wilis Village Cooperative and expressed their intention to construct a 6-cubic meter biogas reactor capacity due to the reasons of fund availability.  Along with BIRU staff, the representative of Tani Wilis Village Cooperative visited Abas house and conducted  a survey.  Several technical recommendation given include, firstly, to cope with the existing issue of unpleasant odor of chicken manures, Abas was suggested to construct a larger biogas reactor hence more manures can be directly fed within a particular day to the digester without leaving anything behind.

Secondly, there should be additional treatment in order to allow the digester to be fed only with clean chicken manures only.  Lastly, due to the high turnover of meat poultry inbound and outbound traffic, the bird population is recommended to be sorted in 3 coops based on the age of the birds.  The purpose of sorting the birds based on their age were to avoid harvesting them all at the same time.  Hence, the sustainability of daily feeding process for the reactor may then be maintained.  In response to such recommendations, Abas and Umi asked for more time to think it over.  Until they finally contacted Juwardi and expressed their ability to increase the capacity of the biogas reactor to 8-cubic meter.  Abas was also to build a permanent cement floor under the chicken coop in order to keep the manures clean and sort out the birds’ feather from the manures while doing the daily feeding process on the biogas reactor.  Rotational harvest will also be done to ensure the supply availability of manures during feeding process.

The construction of reactor started on October 2012.  Initially it worked well but then Abas felt there are some problem as the flame was unstable.  He then reported this issue to Tani Wilis Village Cooperative.

Following the visit and inspection, the source of the problem was an incorrect way of refilling as the composition of water mixed into the manures were too much hence prevented the complete fermentation process.  After receiving the guidance on how to refill the reactor in accordance with the recommendation, Abas BIRU stove one week later was back to normal.  However, early on February 2013, Abas once again contacted Tani Wilis Village Cooperative due to the issues he encountered with the biogas.  Upon inspecting, it is discovered that ther are antibiotic chemical substance which was mixed into the digester hence preventing the normal flame to light on.

“I understand that biogas shall not be contaminated with chemical substance, hence manures of chickens which have received antibiotic injection shall not be allowed to be fed into the reactor.  I mixed the antibiotics with the chickens’ drinking water.  It turned out that the antibiotics was excreted along with the chicken manures and was accidentally fed into the digester,” Abas said laughingly, recollecting his idea which had caused problems to his biogas reactor.

“Biogas saved me,” he continued.  Back in March 2013, a team from Community Health Center and Village Apparatus paid a visit to his home to inspect his poultry farming business.  There were complaints regarding unpleasant odor produced by his business.  At the time Abas was not home.  Umi received the visit of the entourage, accompanied them to directly witness the condition of his chicken coops in the backyard, and at the same time proved to them that there were no more unpleasant odor produced as the complaints suggested.  Umi also showed the biogas installation located not far from the chicken coops and demonstrated the operation of biogas stoves.

“We have constructed biogas reactor to cope with the unpleasant odor of the waste.  We also produce free fuel for cooking purposes,” Umi explained to them.

“They even gave a complement on our efforts to cope with the waste.  They were impressed with the biogas technology,” Abas said.  He and Umi can now smile in relief.  The initial investment which caused them quite significantly on their wallet, now have brought them the fruits that they have been long waiting for.

“The level of unpleasant odor have now been reduced down to 75-80%.  No more protest from their surrounding neighbors.  We are content with the Domestic Biogas,” they said cheerfully. (Christina Haryanto Putri and Helmi Buyung Nasution).