Thanks to Pig Manures, Business Profit Has Grown Exponentially 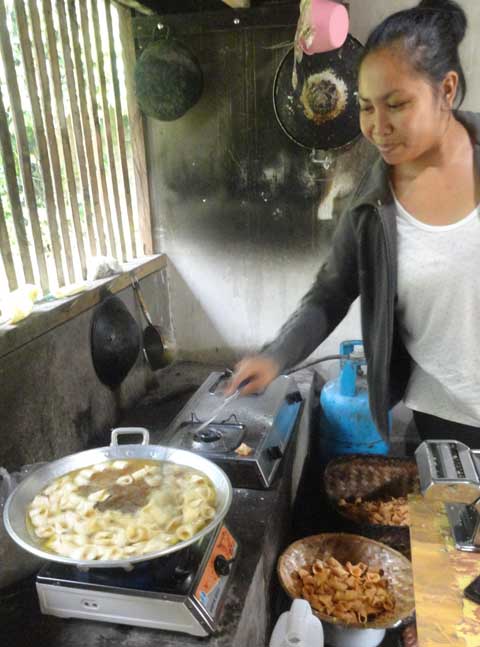 This mother of 1 son and 1 daughter is Wayan Sudarmi (37).  In addition to looking after the two children who are in Junior Highschool, Wayan Sudarmi runs a small family business that is producing light snack such as chips made of rice flour.

This family resides in Rendang Village, Rendang Subtitle, Karangasem Regency.  The husband, I Wayan Sudana, also helps her in packing the chips, supported by her children and two of her neighbors.  Although Wayan Sudana has another job in rafting business not far from their home, he remains passionate to support the family business.  Moreover since October 2012, the family has seen steady increase in profits.

The reason is, they can now save on their LPG expenditures for the need of their light snack business.  The family has installed a 6-m3 capacity reactor in their backyard, close to the stall of their pig livestock.  Prior to using BIRU, they need 6 to 7 LPG 12-kgs capacity tanks monthly to fulfill the production of 1,000 bags of chip every two days.

Thanks to the biogas that they produce, now Wayan Sudarmi family only need to purchase 2 to 3 LPG tanks monthly.  It means, that the profit earned by this family has increased 50% or equivalent to Rp 240,00 every month.  Moreover, during the dry season, the BIRU reactor belonging to the family has seen an increase in the gas production.  It means that they can further suppress the need for LPGs and boost the profit level up to Rp 300,000 monthly.

Everyday, this family spends around 3 hours to produce the chips which then they sell at traditional markets and nearby stalls, and even up to Bangli and Denpasar.  A bag of chip is sold for one thousand rupiah.

The family’s BIRU biogas has also been put to use for the cooking needs of the family which normally is operated by Wayan Sudarmi for 2 hours daily, starting from 5 o’clock and up to 7 o’clock in the morning.  In the late afternoon, the family can still utilize the BIRU gas to boil the water needed by the family. (end/ming)