Ever Since Using the Biogas, the Home Business Has Shown Promising Progress 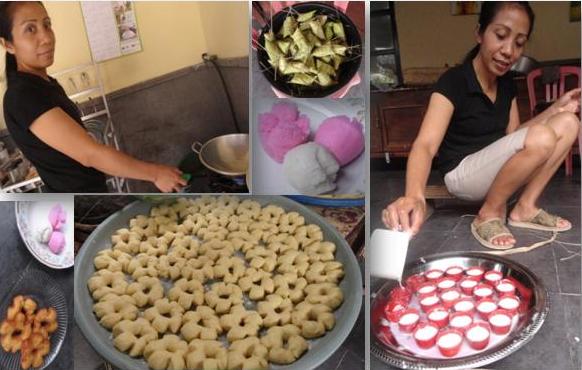 One of them is Luh Ketut Eniati, 36 years old.  The lady resides in Banjar Rendang Tengah, the area which is situated within Rendang Sub District.  It all started with her husband idea, Wayan Partha (42 years old) who has shown his persistence to build a biogas reactor for this family, Mrs. Eniati finally put the biogas to use to start a small family business.

It all begins when Mrs. Eniati feels that the investment to build 1 new BIRU reactor with a 6-m3 capacity is beyond the family’s affordability.  Finally this mother of two, a 14-year old son and an 8-year old daughter look for a way to enable the investment becomes a productive one which will enable to generate additional income stream although Mrs. Eniati works as a restaurant staff in a white water rafting services near to her home.  Moreover the family-owned biogas reactor produces gas more than what the family needs on a daily basis.  Therefore, Mrs. Eniati finally attempts to produce home made snacks such as doughnut, apem (a pancake made of fermented rice and flour), and other traditional Balinese cakes to be marketed to potential consumers around them.

As a matter of fact, last year Mrs. Eniati has attempted to involved in similar home business.  However, due to limited fuel supply and free time, Mrs. Eniati was forced to abandon the business.

However, since they are able to secure “free” fuel, that is a biogas produced by family-owned BIRU reactor, the challenges they used to encounter has been gradually overcome for now Mrs. Eniati now only works at the white rafting services from 9 to 11 in the morning.

Even now Mrs. Eniati has to turned down the customers’ home made cake orders from time to time.  She reasoned that it is only an additional income stream which shall not interfere with her primary business and her time with the children and family.  Ultimately, Mrs. Eniati produces only a sufficient amount of cakes and distributed the products through her in-law shop situated in Klungkung.  Other than distributing the cakes through her in-law shop, it is such a rare occasion where Mrs. Eniati is willing to accept special order.

Every morning, Mr. Partha, on the way to his office at local Drinking Water Utility of Klungkung District, set aside a time to deliver the cakes produced by his wife to the shop belonging to his sibling in Klungkung.

It used to be that the family consumed one 3 kg-capacity LPG every week.  But now since they operate a BIRU reactor, they only need to buy the LPG once every two months.  They use the LPG for backup purposes only, and most of the time used for the water heater in their shower rather than consumed for daily cooking purposes.

Mr. Partha has been longing to install a BIRU reactor for he has witnessed himself on plenty of benefits his office colleague reaped from the BIRU reactor he owns.  Additionally, Mr. Partha has gained understanding on the benefit of biogas long before he came in contact with BIRU program.  For him, the biogas technology is the most suitable way to deal with cattle manures issues and fuel scarcity as most people endure today.

As they restore the home production of cake business due to access of free gas suply provided by BIRU reactor, ultimately the family start to earn additional income stream in addition to their primary income sources.  Moreover, their household expenditures decrease significantly in comparison to the preceding years.  It used to be that they spent Rp 120 thousands during the period of 2 months to buy LPGs.  Now they spend only Rp 15 thousands during the same period.  An equivalent saving of Rp 105 thousands is finally secured.

As for their homemade cake business, the family manages to earn a net additional income of around Rp 300 thousands.  Other than cakes, Mrs. Eniati also produces taro chips.

Once every three days, Mr. Partha will collect the sales money earned from the cakes sold through his sibling’s shop in the range of Rp 400 to Rp 500 thousands.

As he is so eager to install a biogas reactor at his home, Mr. Partha requests an approval from his wife to apply for a loan from the nearest LPD (Village Financing Institution).  Finally, the family agrees to apply for loan assistance in the amount of Rp 5 millions which they have to repay within a maximum of 10 years period.  However, as they now have earned additional stream of income as well as saving household expenditures, they finally manage to fully repay the load within the period of 3 months (end/ming).