Cooking Plecing* is Faster with Biogas 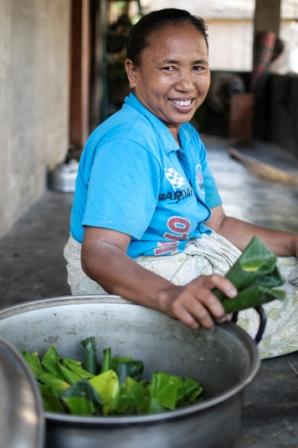 It is 4 o’clock in the morning. Most people in Kemuning Hamlet in West Lombok, Indonesia, are still sound asleep. Muslimah, however, is already wide awake. The 43-year-old woman has been busy in the kitchen, preparing plecing lontong –traditional food of Lombok– to sell at the local market. “I sell plecing every day without any holiday unless I am sick. The earnings are not bad as extra income,” she said, smiling.

Muslimah has lived in the village for over 20 years. She lives with her husband, Fauzi, 51, a farmer and chairman of the Farmers Group ” Patut Patuh Pacu ” which consists of 90 members. They have four children: Ahmad Januardi (25), Juniati (24), Sukamdani (20), and Nurhidayah (19).

Every day, the native Lombok woman begins and ends her day with cooking. She cooks fresh vegetables for the plecing in the morning, while the rice cake that takes longer to cook is prepared the night before, just before going to bed. She does it all with pleasure as to her, working is not an obligation.

Muslimah calculates all expenses and income carefully, including expenditures for fuel wood and kerosene for cooking rice cake. With a capital of IDR 30 thousand (EUR 2,50) for rice, vegetables and firewood, she produces around 130 packages of plecing. The selling price is different depending on the contents of plecingpackets,from IDR 500 to IDR 2,000, – per portion. From selling plecing in the traditional market near her house, she gets a net profit of IDR 40-50 thousand (EUR 3,60) per day.

Muslimah cooks in the small kitchen next to her house. In Lombok, people commonly cook with firewood or liquid petroleum gas or combination of both. For Muslimah, the options are not limited to that –she also cooks with biogas.

The biodigester behind Muslimah’s house was built in December 2011. Since using biogas, she saves a considerable amount of money from fuel. In the morning, she cooks vegetables with the biogas stove. “Cooking plecing with biogas is faster. The taste is exactly the same, there is no difference from cooking with firewood or kerosene,” she said.

Although she now has biogas, Muslimah still uses firewood in the evening as the biogas produced is not enough to cook the rice cake that takes up to three hours. She still feels it is a good deal to have biogas, though. Before, she spent around USD 17 per month for 3 tanks of 3kg-LPG and firewood. Now, after she has started using biogas, the expenses are reduced to only around USD 6 per month.

For Muslimah, the profit from selling plecing lontong is just enough to meet the family’s daily needs. If there is some money left, she saves it for other purposes. She wants her children to be successful and well-educated. “From money saved, we sent our first child to college,” she said proudly. Ahmad Januardi, Muslimah’s son, is now studying English literature at a private university in East Lombok district, in Nusa Tenggara Barat province.

In Kemuning hamlet, Banyu Urip village, West Lombok, there are about 10 families who already use biogas for cooking fuel. The digesters are built by the Indonesian Domestic Biogas Programme with additional support in the form of building materials from the provincial government of West Nusa Tenggara. With simple care, the concrete digester can serve a family up to 20 years.