Bio-Slurry in Exchange for Grass 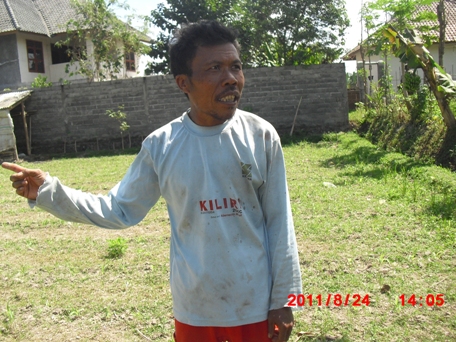 In the beginning, Athar felt reluctant to have a biogas reactor. This farmer living in Kebon Lauk Hamlet, South Masbagik Village, East Lombok, thought that the concept of biogas was not that beneficial. To cook, he and his family could rely on firewood collected from his neighbors’ fields. Moreover, he thought that the price he had to pay to get a reactor was going to hurt his wallet.

However, a field counselor at the farmers’ group where Athar is a member did not stop encouraging him from building a biogas reactor. He finally consented. He put his name on a list of people wanting to get a biogas reactor.

During the process of building his biogas reactor, he had discussions with a supervisor from Yayasan Mitra Membangun Masyarakat Sejahtera (YM3S), one of BIRU programme’s construction partner in Lombok, who watched over the construction of the reactor. From the discussions, Athar found out that not only the reactor could produce fuel, but its waste matter, namely bio-slurry, could also be used as fertilizer.

Today, Athar gets the benefits of his decision. To him, a biogas reactor is not only fit for cooking. As it turned out, bio-slurry could give economic advantages as well. It could be used as a fertilizer for plants. He applied it on his tomato garden, and the result has been satisfactory. “The harvesting period was over three months. Previousy, I could only harvest the fruits for one and half up to two months. Today, if you decide to not replace the plants, they can produce fruits for as long as four months,” Athar said.

Seeing how the plants that received a bio-slurry treatment turned out to be quite good, his neighbors expressed their interest to use some of the bio-slurry produced by his reactor. The neighbors even offered to exchange it with cattle feed, such as grass.

“Now I don’t have to worry about being too tired to get grass for my cattle. Many of my neighbors are happy to exchange the slurry with grass. One sack of grass for two jerry cans of bio-slurry,” he said.

Now Athar is more determined to make the best of bio-slurry. Dua parcels of his land are now cultivated with corn. One plot is treated with liquid bio-slurry, the other with dry bio-slurry. “I have prepared ten sacks of dry bio-slurry to fertilize the corn with. I am certain the result will be great,” Athar said enthusiastically. BIRU indeed turns waste into worth, including the waste of biogas itself. (M. Ali Ikhsan)