In Favor of Biogas 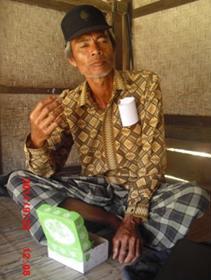 Amaq Djadun made the decision to use biogas without a slight doubt. The decision was made after he saw a biogas reactor at one villager’s house in Teniga Village, Tanjung Subdistrict, Lombok Utara, which had been functioning perfectly. Amaq Djadun believes that biogas is the safest fuel for cooking. Moreover, cow droppings as the raw material for biogas are available in abundance in the area. He is a farmer and a cattle raiser. The people in his neighborhood in Pendua Village, Kayangan Subdistrict, Lombok Utara mainly work on the fields and raise cattle.

At the beginning of the construction of the biogas reactor at his home, Amaq Djadun collected cow droppings from several of his neighbors’ cowsheds. He saw that this would make the process of filling up the reactor more convenient later on. The people of Pandua, however, found this odd. His neighbors started to wonder about Amaq Djadun’s new routine. So he told them the reason behind it. “Many did not believe that cow droppings could produce gas, which in turn could be used as fuel to cook,” Amaq Djadun said.

Amaq Djadun’s neighbors became extremely curious about the construction of his biogas reactor. During the construction, his house was never short of visitors. He answered questions about biogas according to the information he had received from a supervisor from BIRU’s construction partner. To complement his elaboration, he played a film about biogas that he had received from BIRU staff to a gathering crowd. The reactor’s construction became a spectacle. “My house became crowded every day. The people’s attention was quite high. I was worried that the device would not function well. I really was,” Amaq Djadun said.

The neighbors followed the development on the construction of Amaq Djadun’s biogas reactor. When the reactor finally functioned well, he was really relieved. The story about biogas from cow droppings spread fast. More people came to his house. Their curiosity was answered. His success prompted others to build their own biogas reactors. Today, seven people have registered to be the next biogas users. “The safety factor pushed other villagers to use biogas. In addition, cow droppings are available in large quantity, and therefore biogas is very suitable for further development here. To get around the issue of money, we have come up with the idea of arisan [regular social gathering whose members contribute to and take turns at winning an aggregate sum of cash]. With this system, there is an assurance that each member of the arisan will have enough to build a reactor,” Amaq Djadun concluded. (M. Ali Iksan)

* Amaq is a Sasaknese title almost similar to “Mr.”