“With BIRU, I Never Run Out of Work” 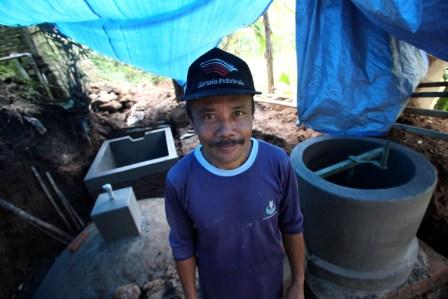 Holding a hoe, the man was sitting against the wall of a brick house. Sweat wets his t-shirt. Looking pleased, he looks a glimpse at the half-finished biogas construction behind the house. “This is the 30th biodigester that I built,” he says proudly.

Subarudin, 35, lives with a wife and two children in Dusun Plengsengan, Kandangan, Kediri District, East Java; a province in the eastern part of the island of Java, Indonesia – the second most populous Indonesian province with 37.4 million inhabitants or more than twice the population of the Netherlands. He has been working as a mason for around two decades, building brick structures – mostly residential houses.

“I have experienced building biodigester, yet I learned new things from the BIRU program. The structure is different. Made from local materials, the structure is simple yet strong,” says the man who studied construction technique at the State School of Technology in Blitar, East Java.

Subarudin was first introduced with biogas technology in around 2006 when the Indonesian government biogas programme was implemented in the area. In June 2010, he joined BIRU program as biogas mason under the management of KUB Sami Mandiri, East Java. Having more than 450 members, the cooperative is one of BIRU construction partners in East Java. Established in 1990, it utilizes the capital from its Saving and Loan unit and receives financial support from a Switzerland-based food company, Nestle, to support the implementation of the biogas program in its areas.

Subarudin received trainings from BIRU programme to increase his capacity and to ensure that the quality of the biodigester built meet the standards. Even with his extensive experience as construction workers, Subarudin admits that he learns new things with biogas. “I now know how to make a mold, to test leakage in the pipes and much more”

Not only building biodigester, BIRU programme develops the capacity of its construction partners and the individuals working with them to support the continued and sustained development of the biodigester sector in Indonesia.

Initiated in May 2009, the BIRU programme is implemented by Hivos, a Dutch NGO with technical support from SNV. The programme aims to generate and expand biogas market within Indonesia. On November 2009, the programme began its implementation in East Java covering 11 sub-districts and four regencies. Until end of May 2011, the programme has successfully builds more than 2,600 units of biodigester throughout the country with more than 2,300 amongst them are in East Java.

Not only gain new knowledge, Subarudin also get an increase in his monthly income. The increasing demand for BIRU digester makes him somewhat a regular worker. For a casual worker like him, continuing work means continuing income – something a construction worker like him has never experienced before.

“The construction fee as mason for building regular house and BIRU digester is basically the same. What makes it different is that there is continuing demands on the digesters. So with BIRU, I never running out of work,” he explains. “Like now, I have not finished this one and others already on the waiting list,” he explains. “When all the work done in this village, I want to expand and build biogas digester in other villages”

During the old days, Subarudin earned IDR 1 million or EUR 80 per month working as casual construction worker. Now, with the continuing work he has as biogas mason, his monthly income increase to more than IDR 2 million or EUR 160 per month. Beside that, he also gets additional income from his milk cow and agricultural field.

“Working for BIRU, I now save money for my children; for their future.”