Biogas, for a Better Family’s Life 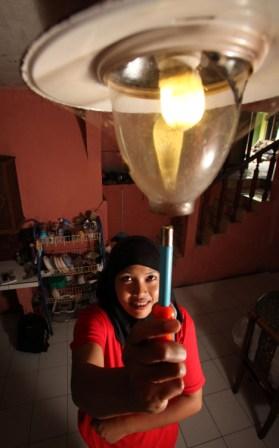 It has been eleven years since Fatchiyah and her husband, Yusuf, 35, started a business as milk cow farmers. Started with two cows, they saved money and now have four cows in their stable. The family lives in Nongkojajar, Pasuruan district around 60 km south of Surabaya, Indonesian second-largest city and provincial capital of East Java. In this area, dairy farming was first attempted by Dutch colonials in 1911 to satisfy a demand for fresh milk. As commonly faced by milk cow farmers in in Tlogosari village where they live, the couple also struggle with the high need of cooking fuel. “We spend almost 1/3 of our monthly income to buy fuel,” says the 32-year-old woman.

Like many household in the neighborhood, Fatchiyah uses a mix of liquid gas and fuel wood for everyday use. They mostly use liquid gas for household use, and fuel wood to boil waters for the cows. In a month, she spends IDR 450 thousand or around EUR 36 for fuel only; a big allocation for her meager IDR 1.5 million or EUR 120 monthly income.

“The cost for fuel is high. If we use firewood, the pots used to boil the water turns black in no time because of the soot,” the woman utters. Not only that traditional fuel such as firewood is a waste of natural resources and harmful to the environment, it is also time consuming for those whose routine is to collect them. The users of traditional fuels are also exposed to smoke that make them susceptible to respiratory tract infection and eye disease.

Aim to improve living conditions of the Indonesian households, the Dutch Government-initiated BIRU program first launched in May 2009. Implemented by Hivos, a Dutch NGO with technical support from SNV, the program was designed to create and increase the use of biodigesters as a local, sustainable energy source. To achieve the goal, the program partners with reputable local organizations as its Construction and Lending partners. One of them is cooperative KPSP Setiakawan; the largest milk cooperative in East Java province. Working in 12 villages in Tutur Nongkojajar District, the cooperative receives loan from a national bank BSM (Bank Syariah Mandiri) and from a Switzerland-based food company, Nestle, to support the implementation of the biogas program in its areas.

Fatchiyah is a member of KPSP cooperative from who she first learned about biogas. “We were encouraged by the cooperative to participate in the programs. We were offered low interest credit and two-million subsidy from the total cost,” the woman eagerly explains. “We were very interested, so we applied.”

The BIRU digester is made from masonry and concrete work concealed underground. It converts animal dung into biogas that can be used as fuel for gas stoves and lamps. The fermented dung called bio-slurry also serves as quality organic fertilizer with multiple appliances that suitable for household use. With proper maintenance, the digester can last up to 15 years; a good investment for a sustainable and cheap source of energy.

“Milk cow farmers in East Java generally have a more advanced investment paradigm in cattle farming. This makes them easier to understand and accept the concept of investing in the development of new and renewable energy sources,” said Wasis Sasmito, Provincial Coordinator for BIRU program in East Java province.

For the 6m3 biodigester, Fatchiyah has to pay IDR 4.5 million in addition to the two-million subsidy received. With the low-interest loan from the cooperative, she pays an installment of IDR 126 thousand or around EUR 3 per 10 days for five years –much less than what she must pay for fuel in a monthly basis. Having to spend less than before, Fatchiyah is very happy. With the spare money from the income, the woman can now apply for bigger loan from the cooperatives to expand the family’s business and make small plantation for flowers and chili.

“I hope our economic will get better and better. Someday, we want to buy a pick-up truck to support the business,” says the mother of 2-year old Shala and 8-year-old, M. Rifkan, smiling widely.

Until end of May 2011, BIRU programme has built 2,300 biodigesters in ten districts in East Java, 450 units amongst them were built by KPSP Setiakawan. BIRU programme partners with 32 local organizations as construction partners throughout Indonesia and aims to build 8,000 unit of biodigester by the end of 2012.